“Man, it’s really sticky!” That was the first thing out of my mouth when I landed in Belize as I stepped off the plane (and I use the term “plane” lightly). Belize is one of those places where you take a commercial jet to the mainland then “climb into” a small, commuter plane either ran by the government or by a disgruntled expatriate collecting a pension in order to get to your final destination. I traveled to Ambergris Caye with a short list of things to accomplish: One, to sight fish Bonefish in the turtle grass; two, to make close friends with a hammock; three, to get a guided flats boat and hunt Tarpon and Permit; four,  to try as many local beers available, and number five, to repeat the first four tasks everyday for a week. 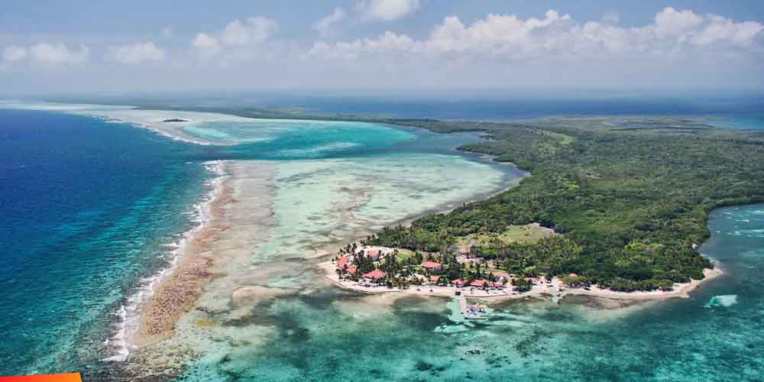 This story came back to mind recently because I was reflecting on why “we”, as fly fishermen, go to great lengths to seek out the most exotic places, only to catch fish that we don’t keep, eat or mount on our walls. It is kind of odd, really.  So I started to think of my first of many Fly Fishing trips I have taken, and a trip to Belize, 20 years ago, helped me solidify the reason for this passion/obsession. Sure, the reasons are numerous: the beach, the perfect weather, the bikinis, the topaz blue waters, the tropical fruit and the delicious drinks that can be made from them… Come on, there is no down side to an exotic place. But I was not there for a tan, I was there to hunt big, powerful fish with a fly rod.

So, back to the story of Belize:

In less than 20 minutes from the airport, sitting in a topless 1976 jeep with original tires, I arrived at the hotel. It was surrounded by a 10-foot stone wall that separated “their country” from “our perfect country”, at least on the inside. On the inside of the wall, ice and buffets; on the outside, Watermelon flavored Fanta and families without shoes. After I checked in with the front desk staff, sporting my tropical shirts, broken english and big smiles, they assigned me a room, complete with palm trees, flowers and a hammock within staggering distance from the bar. My list was getting checked off much quicker than I had imagined, perfect.

Once I got settled in (aka beer in hand), I started to make inquires with the concierge/jeep driver about where I can wade for Bonefish and who was the best LOCAL Tarpon guide to hire for a day. The information came quick. The answer to the first question was, “over there”, as he pointed out of the lobby towards the flats right off the hotel’s beach, which was convenient; and the second answer was just a walkie-talkie chat away.

He buzzes whomever was on the receiving end of his CB,  a distorted voice responded, “ahhhchhhhhaeee  haappppchheeeeee ah ttooo, and OUT” I have no idea what he said, it could have been the local language, slang or a bad connection. My guy, I call him that because somewhere within our 20 minutes together driving, I came to trust him, whatever his name was, and how can you not trust a 270-pound guy who appears to be related to everyone on the caye? He told me that the static voice guy said, “be ready tomorrow and on the dock at 6:30 am“. OK then, I thought to myself; no guide name, no boat name, no nothing. I wasn’t sure if I was going fly fishing or being set up to lose my money, rod and anything else I may have had of value. But it was only 12:15 pm, and I was eager to get my line wet. This is my first time fly fishing the salt. I am a trout guide; a born and raised Colorado native. This was all new, this salt water thing, I was excited. For this occasion, I tapped into to my “pro-deal gear” and geared up with a brand new Sage 9 weight rod, an Able reel, new line, a mortgage-amount of saltwater flies and 2 months worth of casting experience at a local park. All I needed to believe is that I got this saltwater thing under control.

I put on my flats booties, my fishing shorts, a small waist pack, grabbed a cold beer from the beach bar and headed to the flats. (By the way, this beats putting on waders, boots, gravel guards, vest and driving to a river for two hours.) I recalled my research and discussions with my friends that have guided saltwater about what to look for when spotting Bonefish. Impatiently, I casted at anything and everything that moved or caused a shadow, just to cast and to see if, in fact,  I could really cast the distance necessary to fish for any saltwater species.

I’m fighting the wind, I’m getting tangled in my line, the rocks are sharp…I am just floundering out there.  I didn’t event think that there would be coral and rocks out there, I was hoping for white soft sand. Then something happened, at about 40 feet and the wind at my back, I see a tailing Bonefish, just like they said. Its tail just out of the water, a bit of cloudy water around him from nuzzling in the sand and grass. This was it! My first Bonefish and my chance to acquire that “in-the-know” nod.

So I pulled myself together, calmed myself down and tried to remember everything I read, videos I watched and advice I was told over and over by experienced guides. Rule number one, “don’t line or spook the fish”. I am getting ready to cast my line, away from the tailing fish, trying to gage my distance, which was just past the fish, just a leaders length. I feel good about it so I load up my rod and shoot the fly line and fly to the exact spot I was aiming for. I land it and, more importantly, the tail is STILL there. I didn’t spook him. I put the tip down and start to strip, fast then slow, I didn’t really know. I stripped it past him and nothing, I mean nothing, not a turn, not a move, nothing. But what that meant was I still have a shot at this fish. Back to casting, one big pull back, sent line out forward, sent more line out in the backcast then shot the fly right over the fish. I started stripping and then something happened that I didn’t expect, he ate my fly.

Everyone tells you how to spot, cast and fight a Bonefish, but no one really tells you what to expect when a fish like this takes your fly. Imagine this, you cast at a Mini Cooper and you hook the bumper, then, exactly at that moment, the Mini steps on the gas going directly away from you. That’s the feeling, more or less. The fact is, I was not prepared. Once I set the hook, he took off. I had my drag of my reel set way too strong, which resulted in me diving in after my rod after it had been ripped out of my hands by that little freight train of pissed off. Luckily, I got a hand on my rod before it escaped completely and quickly loosened my drag and away we went. The fight begins.

As he swam away, I had the rod bent so much that I was waiting to hear that “gunfire” snap that you only hear when a rod breaks under pressure. Thank god that didn’t happen, but I was waiting. Reeling the best I can, letting it run when it wanted, reeling again, I was making progress. All I could compare it to is a foul-hooked Whitefish; strong, unmanageable, and angry.  As I slowly got my first ‘Bone near me, I realize that I don’t have a net… rookie mistake, so I slowly work my way to the beach and bring that #6 bundle of muscle to the shore, reach down, release the hook from its mouth and watched him swim away never looking back at me. I was pleased.

I didn’t take any pictures, have no prize to show for my heroic efforts, just the cold beer I drank while watching the turtle grass, closely,  for some kind of movement.

Be sure to hit me up this Saturday. I will tell you about the Tarpon experience I had the next day.

One thought on “Quiet Chaos, Part 1”

Taking a deeper look into click-bait headlines and the sound-byte culture.

Diary of a Gen-X Traveler

Traveling to experience places not just visit them!

"Keep your heart right and your line tight."